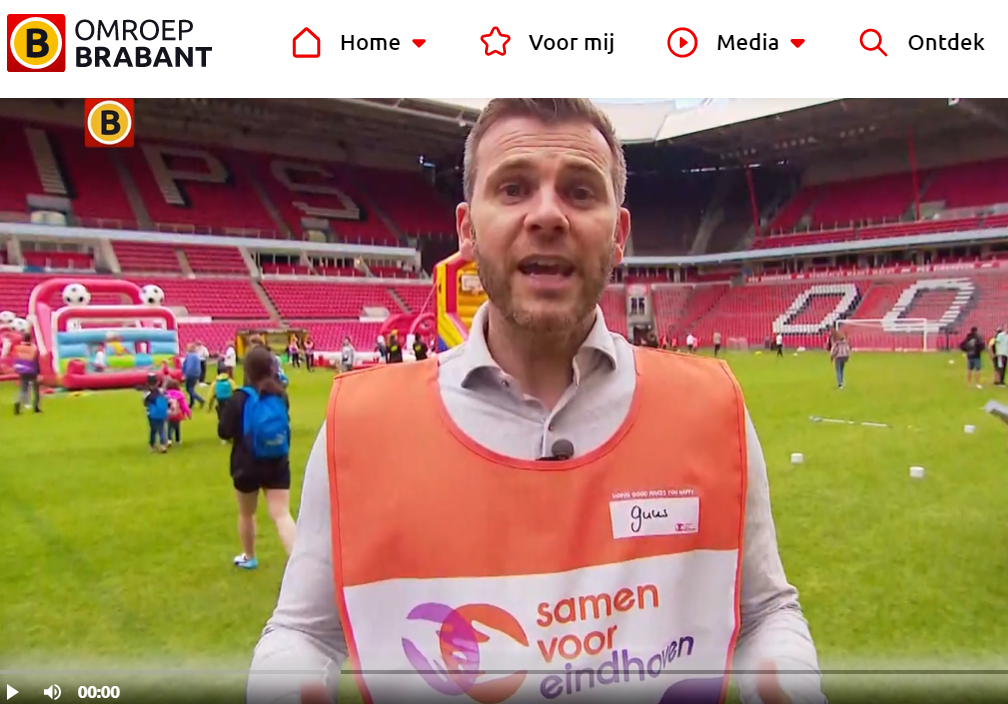 Four hundred Ukrainian children played sports in the Philips Stadium in Eindhoven on Tuesday afternoon. For a while they did not think about the war in their homeland, but relaxed with sports and games. One of them is 15-year-old Zhenya. Her father is fighting against the Russians, but she herself fled to the Netherlands. She is happy to forget the war for a very short time. "It does me good to play sports with new friends here," she says.

The children were challenged with different sports and games, such as basketball, soccer and an assault course. They could also have their picture taken with Phoxy, PSV's mascot. That's how Zhenya suddenly found herself on the center spot of the Philips Stadium. "Unbelievable that I'm standing here now. I think it's very big and beautiful."

She still thinks about the situation in Ukraine often. ''Almost non-stop. But I want to stay positive: life goes on. I'm glad I'm safe here. I've made new friends, so it's better this way."

But she does worry about her family who have stayed behind. "The mood there is subdued, but when I call them, they become happy. My father is fighting with them against the Russians. Through messages, we keep in touch."

The sports afternoon is an initiative of the Partnerfonds Brainport Eindhoven, a group of major PSV sponsors. According to chairman Staf Depla of the foundation, companies in the region are only too happy to help give the children some distraction. "Children have had to leave hearth and home without a father. Their lives go on too, so you wish them, just like any other child, an afternoon of fun playing."

"It's quite difficult, because how do you approach these kids?"

Volunteers from major companies in the region were only too happy to take time off to help. One of them is Guus Pennings: "I am very happy to do my part here."

Guus works at Philips. His boss gives him the opportunity to volunteer during working hours. When he heard about the Ukrainian Sports Day, he was eager to lend a hand. "It's quite difficult, because how do you approach these kids? Do you do it very festively or not, because after all, they are here for a certain reason. But generally you see that they are very relaxed anyway."

This website uses cookies to improve your experience while you navigate through the website. Out of these, the cookies that are categorized as necessary are stored on your browser as they are essential for the working of basic functionalities of the website. We also use third-party cookies that help us analyze and understand how you use this website. These cookies will be stored in your browser only with your consent. You also have the option to opt-out of these cookies. But opting out of some of these cookies may affect your browsing experience.
Necessary Always enabled
Necessary cookies are absolutely essential for the website to function properly. This category only includes cookies that ensures basic functionalities and security features of the website. These cookies do not store any personal information.
Non-necessary
Any cookies that may not be particularly necessary for the website to function and is used specifically to collect user personal data via analytics, ads, other embedded contents are termed as non-necessary cookies. It is mandatory to procure user consent prior to running these cookies on your website.
SAVE & ACCEPT